Circle Talk: Dark Time Tarot with Laura Gonzalez:  Join Circle Sanctuary Ministers Jeanet & David Ewing they welcome Circle Minister in Training Laura Gonzalez for a discussion on the use of Tarot during the dark time of the year for divination, introspection, rituals, and more.


Neighbors is the Weekly’s new series that profiles ordinary people with extraordinary stories to tell. Think we should profile someone you know? Send your pitches to editor@southsideweekly.com.

Laura Gonzalez, a forty-two-year-old native of Mexico City, welcomed me into her home last Sunday to talk about her life as a witch, a Wiccan, and, most broadly, a Pagan. We lit incense upon settling into her kitchen, to calm the air in advance of our conversation. As I waited, I caught the eye of the Hindu god Ganesh in the corner, enshrined on top of a refrigerator. I switched my glance and noticed a whimsical broom guarding a doorway. An open terrarium sat behind me with a turtle basking in the heat lamp, limbs fully extended, unthreatened, and taking it all in.

“The first thing they ask is, ‘Do you worship Satan?’ And Satan is a Christian concept, deity, essence, whatever you want to call it. It’s not a Pagan concept. So no! How can I worship something that I don’t believe in?” Gonzalez said, slightly exasperated. “No, we don’t eat babies and we don’t kill cats. What you see in the movies—no. We don’t fly on brooms.”

“But you do jump over them!” I quipped.

“Yes!” she said with a chortle. “I love the traditional aspect of it because it was the old witches of ancient times. The ones we are trying to emulate and learn from. They use the broom to cleanse the space and get all the negativity out of it.”

Gonzalez, a self-employed witch, serves as South Side host, co-organizer, and vice president for the board of the Center of the Elemental Spirit: A Congregational Wiccan Community, a not-for-profit organization. She also hosts the Pagans Tonight radio show in both English and Spanish, distributed online using BlogTalkRadio, and has a new program coming out on the platform tentatively called Lunatic Mondays with Laura Gonzalez. The Center of the Elemental Spirit, based in both Rogers Park and Bridgeport, is about six years old, with the latter, South Side contingent meeting for the last year and a half. Marty Couch, a longtime Wiccan priest, founded the Center; Gonzalez joined three months after the opening, and calls herself the “oldest member.”

Gonzalez was raised Catholic, and was the most devout among her family members. Aspects of Pagan ritual surrounded her in the Aztec traditions of her native Mexico. By age sixteen, Gonzalez tore her way through books on the occult, extrasensory perception, and the like. A sense of teenage rebellion caught fire as well, characterizing her departure from the Catholic Church.

“You’re sixteen and you tell people ‘I’m Pagan!’ And people’s faces go…Agh!” Gonzalez joked, as she drew her face into a scowl. “But I really didn’t know what the hell I was saying.”

It took almost twenty years for Gonzalez to find the Wiccan church. In the meantime, she experimented with reading Spanish cards, a less complex version of the tarot cards she now reads for a living. In her early twenties, she followed family ties to Illinois, living in the western suburb of Bensenville before settling in Bridgeport with her husband about fourteen years ago.

“It wasn’t until seven years ago when I first met an American witch,” Gonzalez said. “She recommended a couple of books for me, and I started reading about Wicca.”
Since then, she’s been actively involved in Chicago’s Pagan communities as both an educator and a proprietor. She holds diplomas in tarotology with a focus in Jungian archetypes from a small private school called Saber and Sanar in Chihuahua, Mexico, run by psychologist Christian Ortiz. Her services as a witch are extensive, ranging from tarot readings to teaching classes on Wicca to providing assistance in the performance of prayers and other magic.

“My spirituality has a big place in my work—I’m not a therapist and I’m not a counselor, but I like to call it therapeutic tarot,” Gonzalez said of her tarot reading business. “Because we like to heal people on big or small issues that are happening in their lives throughout the tarot reading. It helps them with guidance.”

Her work with the Center of the Elemental Spirit reflects that desire to heal and guide others. The Center is the only Wiccan congregation open to the public—most others are covens where membership is invitation-only. The Center provides a place where anyone can learn about Wicca, be they students of religious studies, reporters, practicing Pagans, or people exploring their own spirituality, known as “seekers” in Wiccan circles. To date, the group has about 300 members on paper, but the core group consists of fifteen to twenty regulars.
“For me, finding this group was absolutely a coming home,” Gonzalez said. “Like-minded people who are of different ages, colors, genders, backgrounds—everyone is welcome! We just want you to know that there is this group right here.”

Gonzalez considers her role as a witch in Chicago unique, in that she must contend with the advancements of a post-industrial world where the traditions of witchcraft, including apothecary arts, midwifery, and farming, are in some ways obsolete. But even as a city witch, she still keeps a broom above her doorway.

“I can still go to Jewel and buy lettuce. But we’re trying to use that mythology and mysticism and practice and tradition to intertwine it into our lives,” she says of witches in the city.
“Most of us in Chicago are urban witches. We all have phones and stuff, you know? So we’re not living in those ancient times, but we’re using those mythologies and traditions to understand our lives now.”

The 40-year-old Mexico City native's business card lists her as a “BRUJA/WITCH” and her services, often performed at her home or coffee shops on the South Side, include tarot card readings and “spiritual counseling.”

Officially, Gonzalez follows a religion called Wicca, a form of paganism that’s snowballed in popularity since the "flower power" movement of the late '60s.

As organizer of a group called Center of the Elemental Spirit: A Congregational Wiccan Community, she now will host a Wiccan gathering twice a month in Bridgeport, celebrating two lunar phases: the waxing and waning moons.

Before you buy a bigger lock for your door with images of a ghoulish green woman with long, creepy fingers, a pointed hat and magical broom stick soaring through your mind, consider Gonzalez’s pitch for Wicca — a far cry from the dark arts portrayed in the movies, she said:

The stigma around Wicca might have you believe witches are evil beings. While Wiccans often practice “magick” or witchcraft, true followers are against anything that might cause harm. Wiccans believe magick is a way to control one’s destiny and make dreams come true by asking the universe for help. Common wishes might include finding a good job or health.

The religion’s critics often confuse Wicca with Satanism because of the pentacle, a Wiccan symbol that includes a five-pointed star inside a circle. The Satanic Church has the pentagram, which also includes a five-pointed star. Four of the points of the pentacle represent the elements of nature: earth, air, fire and water. The fifth point marks the spirit and the circle stands for the eternal circle of life.

“There’s a lot of misinformation that’s misleading,” Gonzalez said. “Thank you, Hollywood … We are not Satanists, because to believe in one, you must believe in the other one. If we don’t follow Jesus … We don’t follow Satan … It’s nothing against the Satanic Church, or any other church. We respect every walk of life.”

Gonzalez welcomes anyone interested in Wicca to attend a gathering at a Bridgeport yoga studio. The group welcomes practitioners from all walks of life. Buddhists and devout Christians have attended rituals with the Center of the Elemental Spirit.

Those who are unsure of their religion, exploring their options, are called "seekers."

Here’s what to expect if you’re curious and want see what Wicca is all about:

•        Once everyone arrives, guests are welcomed to socialize and “catch up.” After the meet-and-greet, there is a short meditation on the elements represented in the Wiccan pentacle. According to the center’s informational brochure, “This helps to ground who are present and prepare us for the spiritual part of the evening.”

•        Each gathering is paired with a topic attendees use to develop a “co-created sermon” — an open discussion. The topic assigned to the group’s first meeting was “Bringing Magick to our lives.” People are encouraged to share ideas about the topic and ask questions.

•        Attendees are given time for a short break while the center sets up the ritual space.

•        Then it’s time for the ritual, which, according to Gonzalez, is best to experience firsthand. During the ritual, the Center’s organizers explain what is happening, step by step, and guests are welcome to ask questions as they explore the religion. The ritual is performed to raise energy to achieve personal goals of the group.

The next South Side ritual — themed “Spirituality in Community” — will take place from 7-9 p.m. Sunday.

From Laura’s Old Website:
A natural born Witch Laura discovered her abilities at an early age (sometimes even scaring her school mates).

A natural psychic and Tarotologist, she also enjoys consulting the Spanish cards, and various oracles. Born in Mexico City, she is very familiar with Mexican folk magic and Pagan practices of her native land. A "Bruja" in tune with the cycles of nature and the magic within, she is always willing to help those in need. She has a Tarot Business and makes her living as a full time Bruja.

In her daily life she is an enthusiastic volunteer for her spiritual community as a co-coordinator of Center of the Elemental Spirit in Chicago for the last 6+ years.

She's also a co-editor of the e-zine "El Caldero" (Spanish) and the founder of "Boletin Pagano en Español" (Spanish) a meeting place on Facebook for the Spanish Pagan community; she also participated as a broadcaster for the Pagans Tonight Radio Network show on their Spanish version.

She's participated with Circle Sanctuary as a Speaker Presenter at Pagan Spirit Gathering 2015 (alongside Janet Farrar & Gavin Bone) and also at their Circle Sanctuary's Samhain Festival 2015.

Laura teaches Tarot in private sessions, and has taught English as a second language as a volunteer at a school for adults "Poder Learning Center" in Chicago.

In the media Laura has been featured on:
SOUTH SIDE WEEKLY: City Witches Laura Gonzalez, witch for hire.

After a long and tortured history, society just might finally be ready to embrace them
By LAURA BEESTONStaff Reporter 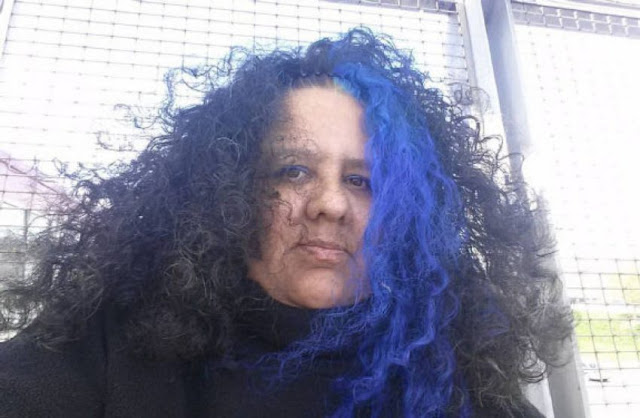 “We are healers, helpers and wise women… A witch is a job title. We have a job to do in our community, and our job is to help people heal. The witch’s job is to guide you and show you different paths to help you see your own ways towards healing. I can pray for you, or do a spell, or dance or chant for you, and it will be my honour to, but if you’re not willing to change your consciousness, or become empowered in the fact that you and only you can shift your consciousness to heal yourself, then the magick is not going to work.”